Super Lawyers Magazine "Distinguishing Herself: How Jean Chou took a virtual Park Avenue address and made it real"

Our Principal Jean Chou was interviewed in the 2019 New York Metro Super Lawyers Magazine. The excerpt is below:

In 2010, barely a year out of law school, Jean Chou launched her own Manhattan-based law firm focusing on real estate transactions. It didn’t matter that, until that point, much of the 26-year-old’s experience in the field consisted of navigating small-time tenant-landlord disputes at the Queens Housing Court; Chou was eager to make a go of it. She paid $100 a month for a virtual midtown office space so that she could list “100 Park Avenue” on her letterhead, and set up shop in her East Village studio apartment.

“I didn’t have any expectations,” she says. “If it didn’t work out, I figured I could always switch gears.”

Chou, 35, never had to switch gears. Her tiny operation blossomed into JLC & Associates, a seven-person real estate and contract negotiation firm flourishing in one of the most high-profile and competitive real estate markets in the world. And the firm’s current Park Avenue address? It’s real now.

Growing up in South Jersey, Chou inherited her entrepreneurial streak from her Taiwanese parents. Her mother started her own dermatology practice while her father launched a medical device company. Staffing the front desk at her mom’s office while she was still in middle school, and later selling lotion samples on eBay, Chou says, “I knew from a young age I was going to do my own thing.”

It wasn’t until she began attending New York Law School and interned at Blesso Properties, an award-winning real estate developer in the city, that she landed on what that thing was: real estate law. She liked how the work led to tangible results: a family acquiring their first home; an old building redeveloped. She also appreciated the nonconfrontational nature of the work. “In real estate law,” she says, “all of the parties—the attorneys, the brokers and the clients—are often coming together with the same goal: to close the contract.”

Plus it was New York—filled with unusual properties, sky-high prices and lots of competition. The demanding market meant she would have to distinguish herself to survive.

She chose quality over quantity, delving deeply into every case rather than cramming as many transactions as possible into her caseload. “We spend the time reviewing the hell out of every transaction,” she says. This includes poring over financial statements and condo and co-op meeting minutes, and looking for red flags that might indicate maintenance problems, financial negligence or unwieldy management.

JLC & Associates handles real estate deals worth tens of millions of dollars while still representing first-time buyers of small apartments. “Our clients really run the gamut,” she says, “but our roles don’t change at all.”

On the pro bono side, she’s helped LGBTQ foreign nationals who fear persecution win asylum cases (see sidebar), and frequently counsels GLAAD, formerly the Gay & Lesbian Alliance Against Defamation, on contract matters. “As a gay woman, it’s important for me to contribute,” she says.

After watching her parents work all the time, it was also important to find a work-life balance. She credits her ability to do so—to go on vacations and not constantly field work-related phone calls—to her colleagues. While she might have started the firm to make a go of it on her own, the best part of her job now is cultivating a team of like-minded attorneys. “We are now a community where clients and referral services look to the team that I put together,” she says. “In order to grow, it has to be a team effort.”

LGBTQ in the USA

“In 2010, I worked with a nonprofit called Immigration Equality on a case involving a Jamaican national. He was a gay man who had been stoned for his sexual orientation in his home country. His partner was also brutally attacked. I remember spending countless days and nights honing all of the details to support our client’s asylum application. I think because I was newly out then, I felt personally attached to it. I was told our client’s asylum status was the only one granted from the office that day. He lives in New York now.” 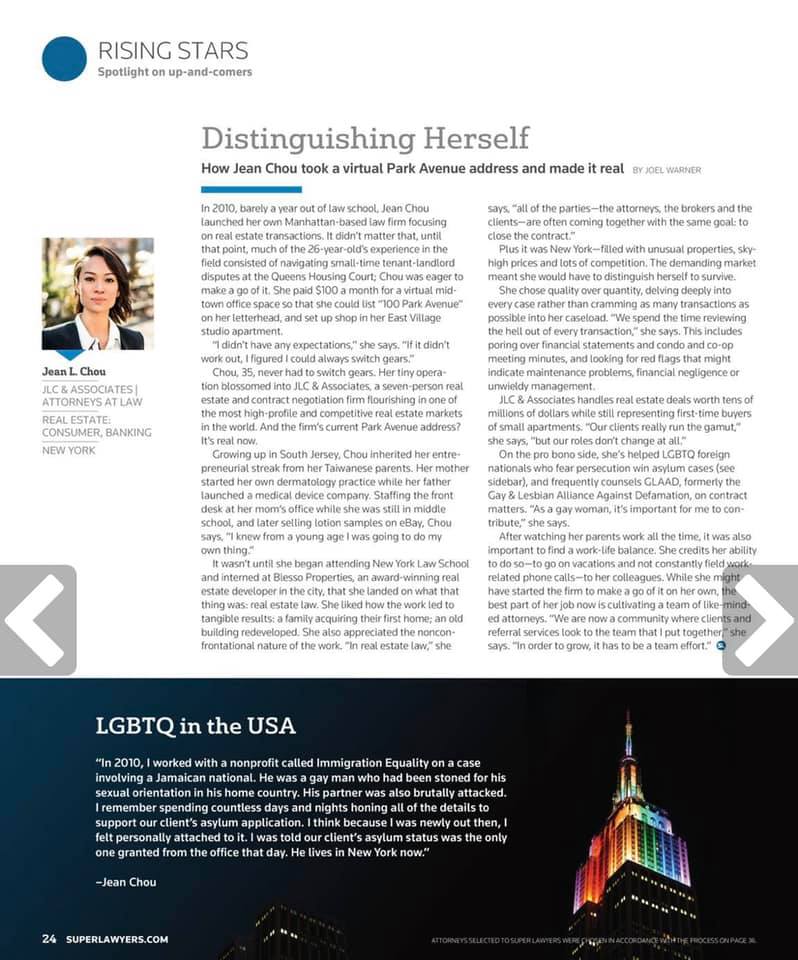